With the number of COVID-19 cases continuing to rise in Northeastern Ontario, new orders are being issued to protect citizens.

Released under the Health Protection and Promotion Act (HPPA), it is separate from last week’s announced two-week lockdown for Northern Ontario.

The Class Order under Section 22 calls for renewed efforts to self-isolate under penalty of fines ranging from $880-$5,000 for every day of non-compliance. The health unit, municipal by-law officers or the OPP can enforce the orders.

Two new cases were announced December 30 with another in the north part of the district discovered.

“A lot of the surge has happened since mid-December. We’ve had 42 cases now since the mid-December mark,” said Dr. Glenn Corneil, the district’s acting medical officer of health and CEO of the Timiskaming Health Unit (THU).

“The majority of the cases we can continue to link together, there is a bit of an increase (in) evidence of community spread which isn’t surprising as our cases go up,” he said in a news conference broadcast Dec. 30 via Zoom.

The Section 22 class order allows the health unit “to enforce self-isolation requirements” to ensure public safety, according to an accompanying press release.

“The Medical Officer of Health may also have individuals taken into custody (in a hospital or other appropriate facility) during their self-isolation period, if they are not in compliance or cannot comply with self-isolation requirements,” said the release.

“There’s pretty good evidence that this is a contagious variant of COVID in our district, that’s not surprising when we see this many cases coming out, day after day,” said Corneil in the press conference.

“I do want to reassure people though that there is no evidence that the variant we are seeing in town is the UK variant or any of the named variants.”

He said there’s “certainly good evidence that it is a contagious version of COVID-19 that’s in our area which is helping to explain why we’re seeing so many people who are contacts of positive cases developing COVID as well.”

Along with the latest cases, “there’s evidence of a new cluster that’s starting in the central part of our district. We know that it’s been mainly in the northern part of the district where a lot of the new cases are coming from,” said Corneil.

He noted that there are no barriers between different parts of the THU’s district to stop the spread.

“We’re hearing people say ‘there’s nothing in my area therefore I don’t have to be as careful’ and we just have to regard this as a district-wide phenomenon that’s going on right now, even though the majority of the cases are in the north part of the district. We’re interconnected and we all just have to be vigilant and reach out for testing if we have symptoms.”

He called it a “significant wave that is hitting our area right now” requiring public health officials to use “all the tools that are at their disposal which is why I made the decision this week and effective immediately to issue a class section 22 under the HPPA for all the individuals for our district.”

The new orders mean fines for those who do not self-isolate when told to do so.

The community-wide edict “is advising everybody in our district that they have to absolutely follow public health direction, specifically with respect to isolation.”

Corneil said the “main power” of Section 22 is it “allows us to move quickly for those who aren’t following public health direction with respect to isolating and self-isolating.”

The message is especially urgent considering the time of year when people want to get together to celebrate the holidays.

“This year we just can’t, especially in our area where there is a contagious level variant and level of COVID that’s quite a bit higher than anything we’ve experienced throughout,” said Corneil.

“It’s just so central to people, stay within your households this year for New Year’s.”

“Public health can recommend and advise as much as possible, but we really need each individual to do their part as well,” he added.

“Individuals choosing not to follow public health guidance, that’s putting all of our communities at risk.”

The full December 30 press release from the health unit follows:

The Timiskaming Health Unit’s Medical Officer of Health has made the important decision to issue a Class Order under Section 22 of the Health Protection and Promotion Act. The Order is effective immediately and will remain in effect until the Medical Officer of Health determines that the Order is no longer required. The Order enables the Timiskaming Health Unit to enforce self-isolation requirements for the group of individuals to whom it applies.

“A key role of Public Health in controlling the spread of COVID-19 is to identify, contact and ensure those testing positive for the virus and high risk individuals are isolating as quickly as possible,” said Dr Glenn Corneil, Acting Medical Officer of Health and CEO for the Timiskaming Health Unit. “While most people have been compliant with our isolation orders, we need everyone to do so. Issuing Section 22 is one tool to help with progressive enforcement. As we’ve seen, there are some people who aren’t following public health direction. When COVID gets into a community, that is what drives transmission.”

The Order is different from the provincial shutdown. Where the provincial shutdown asks everyone in Ontario only to leave home for essential purposes and not to be in close contact with anyone outside their home, the Order applies to all people residing in or present in the Timiskaming Health Unit district who are required by public health to self-isolate, including those who:

People in Categories (a), (b), (c), and (d) above must self-isolate and follow other directions in the Order.

The purpose of Category (e) is to require parents and others who have the responsibilities of a parent to ensure compliance with the class order by any person under 16 years of age.

Parents and others must self-isolate only if they themselves also fall within Category (a), (b),

The Timiskaming Health Unit, with support from police services and bylaw officers, will enforce the Order. Failure to comply with this Order is an offence for which you may be charged, or liable to a fine of $880.00 (ticket) to a maximum of $5,000 for every day or part of each day on which the offence occurs or continues to occur. The Medical Officer of Health may also have individuals taken into custody (in a hospital or other appropriate facility) during their self-isolation period, if they are not in compliance or cannot comply with self-isolation requirements.

Complete information on the COVID-19 Class order can be found at www.timiskaminghu.com, including a Frequently Asked Questions section.

The public is reminded to follow public health measures including the provincial shutdown, which came into effect on December 26, 2020 at 12:01 a.m. For more information on COVID- 19 go to THU’s website COVID page and the Ontario COVID website. 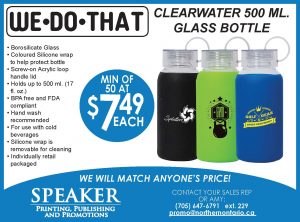