With heavy hearts but also with a sense of relief now that her lengthy struggle with Alzheimer’s disease is over, the family announces the death of Gloria Paoletti on Thursday, July 22, 2021, at the age of 82 at Temiskaming Lodge in Haileybury where she had been a resident for the past few years. She was a much loved and well-respected member of her family and the community.

Gloria was predeceased by her father Arnold, her mother Josephine (Bernacchia), and her older brothers Gerald and Quinto.

Gloria was born and raised in Cobalt, Ontario, where she attended St. Patrick Elementary School followed by graduation from the New Liskeard Secondary School Business Administration program. Gloria had a long service career beginning with a local chartered accountant, then moved to New Liskeard Secondary School, before ending her career with retirement from the Temiskaming District School Board in 1994.

In the fine Italian tradition, Gloria loved food – from preparing and cooking it to sharing with family and friends. A great cook, Gloria was particularly appreciated for her desserts.

Gloria spent a significant part of her adult life lovingly caring for her mother Josephine (Pep) ensuring that Nonna lived a long and healthy life at home. Always such a family person, even though she remained single, Gloria was like a second mother to her niece and nephews. She loved her family and spent time and effort on celebrations of birthdays, Christmas, Easter and Thanksgiving, but also BBQs and potluck dinners. Watching Zia Gloria debone a turkey was always such a joy.

Gloria had an affinity for close friendships and maintained meaningful connections with friends from childhood, work and community throughout her life. Her friendships always brought her such joy. A faithful member of Our Mother of Perpetual Help parish in New Liskeard, Gloria served as a member of the Catholic Women’s League for many years, the Visitation Committee and enjoyed a vibrant community faith life.

Gloria was a woman of artistic and creative spirit, whether that was displayed in the wrapping of gifts, her work in water colours, crafts or the elegant Italian sense of style and flair she showed in always being well turned out wherever she went.

Gloria loved the outdoors whether spending time with family at the camp on Pine Lake or at Bass Lake in Cobalt, out blueberry picking, fishing, snow shoeing, X-country skiing or outings in the bush partridge hunting with family in the earlier years.

In her later years, she enjoyed travel with family and groups of friends in Ontario, including a five-week rugged trip with Fred and Louise to the Yukon and Alaska in 1990 (she flew home on a marathon flight from Inuvik), followed by a memorable and moving trip to Europe in 1996, again with Fred and Louise, where she saw much of Europe and was able to reunite with Italian relatives unseen for two generations.

Gloria will be remembered for her easy laughter and being so happily entertained by her niece, nephews and their kids. She will be missed most by her family and friends (including her Temiskaming Lodge family), for being such a warm, loving, kind, generous-hearted and gentle soul.

The entire Paoletti family will be forever grateful to Dr. Don Davies, whose expert advice was carefully implemented by management and the nursing staff, and to all the PSWs who so lovingly cared for Gloria during her entire stay at the Lodge, but in particular during her final days. As you came alone or in pairs to say your goodbyes to her, it drove home to each of us how deeply you felt about her, not only as a patient but as an individual in her own right, and we thank you for showing that respect.

On Saturday, August 14, 2021, at 1 p.m. there was an informal gathering of family and friends held for the interment of Gloria’s ashes at St. Patrick Parish Catholic Cemetery located at Mileage 104.

Donations to the charity of your choice in Gloria’s memory will be gratefully acknowledged. 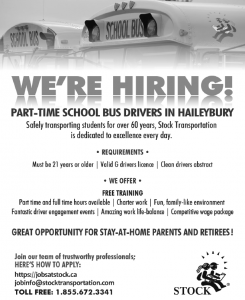